Measuring in a just 5 7/8" x 6" with 136 pages plus a daily log at the end with 25 lines per page, this is an easy and relatively quick read. The page edges start off dark and progress to light as the book moves forward. With a subtitle of "Moving from anxiety and pain to joy and hope", this is written by a man who has been there, having lived with depression for many years and come out the other side. "Negative mental chatter is the cause of a problematic life." "The more often you elect to step out of your stream of negative thoughts, the less influence they will have on your feelings and moods.... As you turn down the volume of mental chatter, life will become easier." NO quick fix though! Be prepared for this to take time! Your thought stream and whether you are living in the past, present or future does and can make a difference. Where are you most of the time? Take the 60 second test in Chapter 8 to find out. Roland was a go-getter and hard worker who owned his own Ford dealership by the time he was in his early 30's. However, this does not mean that he was "living a life of ease". Guilt which he attributes to growing up in a "hellfire and damnation" home had been present from an early age but now moodiness was creeping up on him gradually, so gradually in fact that he didn't even see it. At the age of 40, arguments with his wife were increasing. Doing the sensible thing they went for marriage counseling. It was here that Roland was diagnosed with "severe depression". Having never read a book in his life (no typo here), when given one by the psychiatrist, he found he couldn't put it down. Along with the book he was 'introduced' to Prozac and 18 long years of psychiatric drugs. Sadly in 1997 Roland's 32 year marriage fell apart, much of which he blames on the depression. Married again in 2000, one day he decided to end it all. Why did this suicide attempt not work? The breakthrough came in 2003 but only lasted about a year after which he began to feel himself slipping back. This is where Pieces of Peace (POPS) came in. Will it help change your life also? This book is well written, not heavily technical but full of practical advice for those who are experiencing what Roland went through. Book provided in exchange for an honest review. Thanks, Liz
Roland Griffith
2015-12-15T11:13:47-06:00
This book is well written, not heavily technical but full of practical advice for those who are experiencing what Roland went through.
https://www.rolandgriffith.com/testimonials/liz/
Share this post
Share on FacebookShare on Facebook TweetShare on Twitter Pin itShare on Pinterest Share on LinkedInShare on LinkedIn
Buy the Book 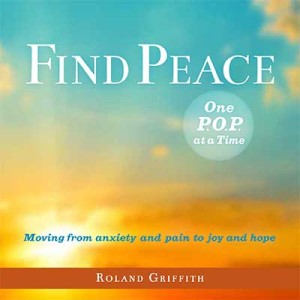 Solid advice on overcoming depression
https://www.rolandgriffith.com/testimonials/doug-erlandson/
As simple as his book sounds it stands on firm ground I coaching us on how to defeat depression and...
Roland Griffith
2015-11-15T11:03:50-06:00

As simple as his book sounds it stands on firm ground I coaching us on how to defeat depression and find those Pieces of Peace. Highly Recommended.
https://www.rolandgriffith.com/testimonials/grady-harp/
An easy read. I highly recommend “Find Peace One POP ...
Roland Griffith
2015-11-17T11:45:06-06:00